To talk, or not to talk? That is the question.

Okay, so if Shakespeare were here and had Inflammatory Bowel Disease he would totally be asking you that exact question right?

I COMPLETELY understand that talking openly and honestly about Inflammatory Bowel Disease, whether you have Crohn’s Disease or Ulcerative Colitis has probably sent many of you to run and hide behind the back of the sofa. Come out…please come out? I get it, I’ve been there myself…

It can be embarrassing, hard to talk about and some of you may prefer to keep it all to yourselves. Keep your ‘secret’ hidden away because that’s what makes you feel most comfortable. Not having to talk about your illness whether it be due to feeling ashamed, frightened or a burden on other people, these are all natural when someone brings up the topic of ‘discussing’ IBD in a very public way.

We have all felt annoyed or angry when someone says a really mean comment. We have all been upset by the way some people treat us. We all get upset and frustrated that people think we have nothing more than a tummy ache. Do you know why this continues to happen? Because the world is uneducated about Inflammatory Bowel Disease. ‘People just don’t get it’ you’re right…they don’t and they never will until we stand united and start discussing Crohn’s Disease, Ulcerative Colitis and how they make us feel. How does it feel? I’m asking you to think about how living with this life changing illness REALLY makes you feel. Sad? Angry? Upset? Fed up? Lost? Confused? Frustrated? Me too.

When it comes to discussing IBD we are our own worst enemy, we can be lost, broken, sad, angry to name only a few…but when anyone asks what do we say? We say “I’m fine.”

I get it…I have been there too. I too used to keep my IBD locked away and hidden, with only those who ‘had to know’ in the know *hmm*
..that is until I realized that talking and discussing Crohn’s Disease or Ulcerative Colitis is a BIG DEAL!! It is so important we talk about Inflammatory Bowel Disease so let me share with you the reasons why I have now found the courage and why I now feel comfortable in discussing IBD with the whole world. For me, feeling comfortable enough to talk about IBD took a little time …as you too will find the courage to discuss things, when you feel good and ready to. Do you know what changed my mind and made me burst out of the IBD closet?

Frustration…I got sooo blooming FED UP of sitting around and waiting for this magical cure. As each day ticks by, are we really any closer to finding that dream cure? I got to a stage where I was so fed up with the slow progress that IBD awareness was making. We want to one day make Crohn’s Disease and Ulcerative Colitis just as well known as other illnesses. Why should they get all of the attention, awareness and funding?!

It was not fair for me to sit back and keep quiet while the brave IBD advocates worked hard to raise awareness on my behalf…so one day I said ‘stuff it, this is me.’ This is who I am, I can’t change my illness nor the way it makes me behave. This is me…like it or blinking lump it! So that day back in December 2013 I switched on my computer and launched myself out of the IBD closet head first into the world of IBD advocacy and my blog ‘Colitis and ME‘ was born.

Discussing Inflammatory Bowel Disease is vital if we are to raise awareness of these life long, life changing, incurable illnesses. By raising awareness we able to educate, we are able to build and unite a community, we are able to support, reassure and guide one another through this turbulent journey that is IBD. If people don’t discuss Crohn’s Disease or Ulcerative Colitis how will we ever find comfort and support in one another if we know not that the other people exist? By talking we are able to build a strong community. 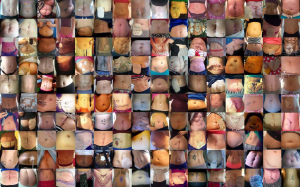 By sharing our stories and raising awareness we are encouraging others to do the same. We encourage people to raise funds/ donate towards better research. Which in turn will mean that one day we will be able to better understand the ‘what’s’ the ‘who’s’ the ‘how’s’ and the ‘Why’s’ of Crohn’s Disease and Ulcerative Colitis.

Talking openly and honestly about our illnesses means we are able to partake in clinical trials, answer questionnaires and surveys which are all vital in answering so many unknowns about Inflammatory Bowel Disease. It is important we join in these research projects to help researchers and scientists gain a better insight and understanding of the IBD world we live in. How can we do this if we refuse to talk about IBD? 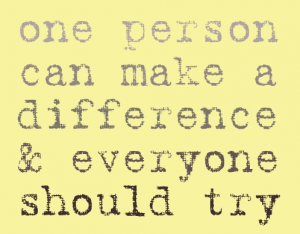 To discuss IBD in a confident way will allow us, as a united community to break the stigma surrounding IBD and in turn we will end up saving the next generation from a world of judgement and taunting.

WE, as the IBD community are so lucky: we are lucky that we have such wonderful and dedicated advocates, carers, bloggers, vloggers, fundraisers and campaigners all of whom have done a magnificent job in laying the foundations which allow us to find our voice.

One person…that’s all it takes. One person to inspire the next. You will never understand the power that one lone voice can generate until you’ve been there yourself.

“One person can make a difference and everyone should try”

Victoria Marie is the author of colitisandme.blogspot.com, and along with her co-founders Sahara Fleetwood-Beresford, Gem Willingham, and Lorna Haymes, created the #GetYourBellyOut campaign, inspiring hundreds of patients to post photos of their belly along with the hashtag, and generate fundraising for Crohns and Colitis UK. This campaign has had a global reach, with participants as far as the USA, South Africa, Brazil, and Australia contributing.

Since March 2014, the #GetYourBellyOut campaign has been going strong, and raising funds for raised Crohns and Colitis UK as well as their own initiatives. To participate, just upload your photo to Facebook, Twitter, or Instagram, then head over here and make a donation. Your photo may end up in a future compilation collage or video!

Connect with the campaign in the following places:

“You see…We are united, we are strong, we are powerful and we are sick of hiding. It it far time the world woke up to Inflammatory Bowel Disease and we plan to become an unstoppable force which people will find difficult to ignore.”